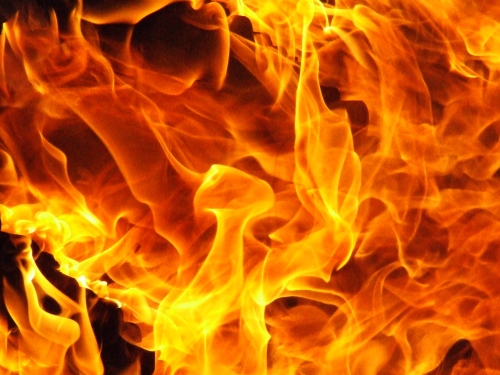 Fire was blazing all around me. All I felt was constant pain from continuously being burned. I wanted and needed to find a way out of that constant blaze, but I couldn’t because all I saw were orange flames raging all around me. They were everywhere! In front of me, to each of my sides, behind me, and even above me, there was no escaping. Why was I so naive? How could I have let myself get there in the first place? Did I really truly believe this could be my refuge? That it could be brighter and more prosperous than where I already was is beyond preposterous! Though it felt like I had been there for nearly a millennia, I had actually only been there for a short while. Still though, that short while was long enough to make me realize that change needed to happen. And it needed to happen immediately. I like to call that place the Abyss of Fire.

Prior to being in the Abyss of Fire, I was in another dark place, a place that I like to call the Desert of Distress. Originally, I had thought that the Desert of Distress was the worst place I could ever possibly be. I felt lonely, unloved, and worthless. In a crowd of people, I felt so alone. Amidst friends and family who constantly said they loved me, I felt hated. Every time I looked in the mirror, I felt worthless, because every time I tried something, I felt like I failed. I felt like every time people looked at me, they were judging me and thinking that I was stupid, incompetent, and worthless. There wasn’t a shadow of a doubt in my mind that the only way out of the Desert of Distress was to enter the Field of Sunshine. And, why not go to the Field of Sunshine? What could be so wrong about a Field of Sunshine?

Everyone I knew told me not to go. I even knew of some people who had gone to Field of Sunshine themselves and strongly suggested that no one even walk near the Field of Sunshine, but I didn’t listen. I didn’t understand what could be so wrong about sunshine. So, I went anyway. I went to the Field of Sunshine. My first day there was like a paradise vacation. The sun was shining and I had no responsibilities. The second day in the Field of Sunshine was just as blissful. On the third day, I still felt like nothing could possibly go wrong. Then the fourth day passed, and the fifth, sixth, seventh and eighth. The sun became much less enjoyable, my skin began to burn, and things slowly started to deteriorate. Then, all at once, the world around me burst into flames until all I could see was red-hot light. Suddenly, my Utopian Field of Sunshine became an Abyss of Fire.

Even when I closed my eyes, all I could see were tongues of fire threatening to engulf me. Sometimes, out of nowhere, the flames would flicker to the size of candle fires, and I would think the worst was behind me, but that was never the case. Whenever the candle fires appeared, I knew I had to fight off several beasts, until on their own time they chose to sleep. As soon as the beasts chose to sleep, the candle fires would burst into full-blown tongues of fire and burn once more, until the beasts chose to awaken. Not once were the beasts or flames ever fully gone, but every once in a while they would quiet down at the same moment. In those moments, I always felt hope, but as soon as I felt hope the beasts would waken and the flames would attack. So, in the few moments when neither the beasts nor flames were raging, I always tried very hard not to hope.

After a while, I eventually accepted the flames and beasts as my new life until one moment I suddenly wondered that maybe, just maybe, if I dared to hope with all my might and refused to quit fighting the beasts, then maybe the beasts could be killed and the fire would be extinguished. That’s when it happened. That’s when all at once the fires went away, the beasts disappeared, and darkness took over. I was slightly scared of the sudden darkness, but I accepted it as a welcome change from what I had grown used to having. After a few moments of darkness, a bright light appeared and I heard a voice calling my name, telling me to follow the light wherever it went. Because the voice was very deep and louder than I was used to hearing, it startled me, but I chose to quite literally take a step of faith and follow the light.

It’s been a while since I took that first step of faith, obeying a voice that I wasn’t absolutely sure I could trust. As nervous as I was to choose to follow an unknown voice, the decision to follow what I now call the Light of Life was the best decision I have ever made and I can’t tell you how grateful I am for the light that has led me thus far. If you feel like you are in a Desert of Distress and you’re looking for a way out, instead of looking for a Field of Sunshine look for the Light of Life.

Until next time this is Brittany Alexandria, daring you to keep obsessing over the things you love! Because we could always use more hope and passion in this world! xoxo

Find my podcasts “The Mask; Her Aid” and “Obsessive Girl Podcast” on your favorite podcasting platforms.

Buy my book “The Mask; Her Aid” by Brittany Alexandria on Amazon for Kindle.