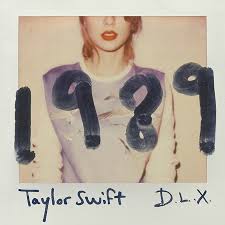 Taylor Swift is a multi-platinum artist known for pushing the envelope, defying the odds, and breaking records. She has won over fifty awards including seven Grammys. Her flourishing career started at the age of sixteen when she released “Tim McGraw.” Since then she has released over thirty more singles. The first four albums in her discography have been country albums, but her most recent album “1989,” is a pop album. “1989” includes 13 tracks, plus an additional six tracks on the deluxe Target Edition including three uncut, original recordings of “I Know Places,” “I Wish You Would,” and “Blank Space.”

“1989” is an album written by a girl who has watcher dreams come true. It is about a young woman who finally knows exactly who she is and what she wants out of life. Gone are the lyrics of an innocent, naïve, and slightly confused young girl. In the first track, Taylor Swift sings “Welcome to New York” to the young dreamers who remind her of the days when she dreamed of “living in a big ol’ city.” She encourages them to keep their heads up when success seems impossible. The rest of the album goes on to show that the rose-colored glasses of her youth have been taken off and been replaced by the clear glassed of a jaded adult.

Unlike her past albums, this album does not live under the fairytale views of a a hopeless romantic. In songs like “Blank Space,” “Style,” and “Wildest Dreams,” she does not sing of the perfect lover, but of the one who got away, because though they worked so well together, they were bad for each other.

Six of the tracks, including “Out of the Woods,” tell tales of how love could be beautiful and simple, but instead the jaded lovers get so caught up in running away from trouble and toward perfection, that their love slowly slips out of their hands until it cannot be reached again.

Hope is not completely lost for the hopelessly romantic “Swifties” though, because Swift does briefly sing of the potential of finding true love in her tracks “How You Get the Girl” and “You Are in Love.” In these tracks, Miss Swift reminds listeners that even as a jaded adult, a part of her still believes that true love is attainable for the fortunate few who are willing to hold on to it and patiently fight to keep it.

Finally, she has the songs “Bad Blood,” “Clean,” “Shake It Off,” and New Romantics.” These are her “whatever, I don’t care” tracks. These songs are written to the haters and people who did her wrong. She’s telling them to say what they will and do whatever, but she will let slide off her back and keep doing what she does. Love her or hate her, but at the end of each day, one thing is true of Taylor Swift—she is honest and relatable. Hates hate because they claim all of her songs are the same, and that might be true, but for her it is not a bad thing. The topics of her songs are always similar, because she writes what she knows. As successful as she is, she is still only 24, and like most other people her age, she really only knows love, heartbreak, and haters. She has not experienced much and that is why “1989” which is just a more seasoned version of her other albums, will inevitably be the first platinum album of 2014. It is also why she has such a large a loyal fan following. Girls and boys alike lover knowing that such a famous star has felt the same things they have felt. Taylor Swift is a star they feel has grown up alongside them and “1989” shows that she still as real and down-to-earth as ever.

After Taylor Swift announced that she was releasing a pop album, I was prepared to be disappointed. It was not because I thought it would be bad; I knew it would not be bad. Taylor Swift and the people she works with are far too talented to come out with a bad album. I was nervous because to me, Taylor Swift was made for the country music she had been singing all along; not because country fits her particularly, but because she made country music her own. I was worried that turning to pop would turn her into a sold out copy of what everyone else was doing. I could not have been more wrong though. As she did with her first four albums, Taylor Swift has taken her chosen genre and made it her own.

Until next time this is Brittany Alexandria, daring you to keep obsessing over the things you love! Because we could always use more hope and passion in this world! xoxo

Find my podcasts “The Mask; Her Aid” and “Obsessive Girl Podcast” on your favorite podcasting platforms.

Buy my book “The Mask; Her Aid” by Brittany Alexandria on Amazon for Kindle.