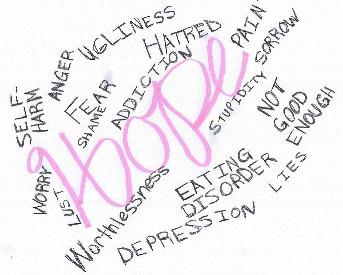 I shared my last blog post with the friend who asked me what to say to and how to be there for someone who inflicts self-harm. She’s one of my closest friends, but we haven’t ever talked about my “abyss of fire” in detail before. She knows that I inflicted self-harm and that God used her and a few other people to bring me out of the darkness. Beyond that, I realized that I haven’t told her much else about my darkest hours. Nor have I told her much about how I came out of it. Her specific question was a two-part question. What did you begin to believe about God and yourself? What was the process like of God changing your heart? I explained to her that it’s a long story, but that it’s another great topic for a blog. That’s why I’m writing this today.

What did I begin to believe about God? What did I begin to believe about myself? What an interesting question that is. It’s funny actually. Not like, “Funny, Ha. Ha,” more like funny interesting. On my eighteenth birthday, I laid in bed crying like I had many nights before. I cried until after midnight, so maybe for half an hour. Then I started writing a letter to my future boyfriend or husband. That’s why I was crying actually. I was eighteen and still single. My dream was to have true love. I didn’t just want a boyfriend, I wanted a husband to marry and do life with. When most of my friends, even those younger than me, had boyfriends, I turned eighteen and was still single. Halfway through writing my letter to “someone” I started over and wrote a different letter. Over four years later, I still have that letter and this is what I wrote:

Here I am now. It’s been four years, four months, and three days since I wrote that letter and I’m still single. You know what I’m not though? I’m not lonely anymore. You know what I am? I am confident. I love myself and I feel beautiful more often than I don’t. My relationship with God could always grow stronger, but it’s so much stronger now than it was when I was eighteen. My insecurities about being single were only a small part of my “abyss of darkness” though. I had much more deeply rooted problems.

What was the process like of God changing my heart? That’s an interesting question too. I was still depressed after writing that letter. I was still hurting myself. Soon, everything changed though. Demi Lovato aired her show “Stay Strong” on MTV and I learned what could happen to me if I didn’t stop hurting myself–I could have ended up in rehab. Then I started listening to BarlowGirl, a Christian girl band. I watched several interviews with of BarlowGirl and learned that one of them—the one I had always thought was the prettiest—had had an eating disorder because she had the same depressed and lonely feelings I had. Learning about Demi Lovato’s stay in rehab for depression and self-harm, among other things, scared me into changing and learning about how God was able to redeem Becca Barlow after she had an eating disorder gave me hope for myself. I didn’t change overnight, but the Lord did start to change my heart a little bit at a time. He gave me Demi and Becca as examples of how it is possible to overcome the darkness. He gave me songs to remind me I wasn’t alone. He also gave me new friends who showed me what true friendship is like.

Realistically, I won’t ever be fully healed, because I’ll always have a scar. Yes, scars make are signs that we survived something that made us stronger, but scars are also wounds that are more easily opened than unharmed skin. Once you give into the darkness, one negative thought or one mistake could put you at risk of going back, but that’s the beauty of healing. It’s also the beauty of grace. For me, God gave me friends and a playlist of songs to remind me that I don’t have to give into the darkness. It’s a beautiful reminder to know that I have people in my corner so that I don’t ever have to fear sleeping into the darkness again. If I do though, I know that it’s okay. Falling doesn’t mean failing. Failing is falling and not getting back up. With the people I have in my life, I don’t think I could ever fall and not get back up, because God knew and still knows that that’s what it takes for me to stay strong. It takes a group of friends who will always help me back up.