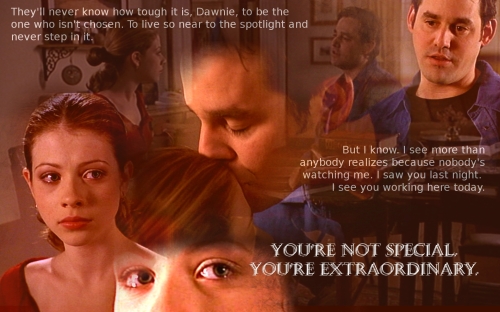 “They’re special, no doubt. The amazing thing is, not one of them will ever know, not even Buffy, how much harder it is for the rest of us…. They’ll never know how tough it is to be the one who isn’t chosen. To live so near to the spotlight and never step in it. But I know. I see more than anybody realizes because nobody’s watching me. I saw you last night. I see you working here today. You’re not special. You’re extraordinary.”

In high school, one of my best friends was a model and my two other best friends were not only two of the best players on our volleyball and basketball teams, but one of them was also the worship leader at our Christian school while the other was the best female student in our school. Now I have a best friend who is on the worship team, and at one point was the worship leader, at our church so she’s often in the spotlight being complimented and talked about for her musical talents. My other best friend will soon be moving across the world with Cru—formerly known as Campus Crusade for Christ—and is therefore kind of a “super Christian” because she’s leaving everything she’s ever know to be the “Chosen One” who helps further the kingdom of God. Even my younger siblings are all a lot better at most things than I am. My oldest brother is married and living on the east coast while serving in the US Navy, my oldest sister is a thin, blonde cheerleader, my next brother is one of the smartest kids in the class of 2019. The next brother is potentially on the verge of becoming a YouTube star, the next sister is super smart and athletic, the next sister is an awesome dancer, and the list goes on and on and on (did I mention I’ve got twelve younger brothers and sisters?) I am no stranger to living in the shadows of the person who’s always in the spotlight.

Some might think that living in the shadows of someone who is in the spotlight is a hard job. It is, sometimes, but most of the time it’s incredibly rewarding. I’m not really the best at anything I do. I’m not a model, I wasn’t great at sports in high school, I was an average student, I’m not on the worship team at church, and I’m not moving anywhere to further the kingdom of God. I do get to watch all those people though. I get to observe them as they take on the responsibilities of their roles and I get to be there to encourage them when they need it most. I see people who are falling apart. I see people who are living on cloud nine. I see people who need a hug or an encouraging word and I see people who need a gentle nudge of a reminder that they need to come back down to earth. I am the goofy sidekick. I am the best friend of the girl who gets the guy. I am the comedic relief and the girl with all the random facts and jokes.

I am all those things, but I also have the biggest heart. I don’t live in the spotlight and I don’t want to. Even if I do become a famous published author, blogger, and or YouTube star like I’d like to be, then I’ll still just be the girl in the shadows. I’ll go to interviews and be super awkward. I’ll win awards and be complimented on my work and I’ll find someway to turn those things into something I could praise someone else for. If I win an award, then I’ll say it’s only because of my fans and my friends and family, not because it’s the thing to say, but because it’s true. If I ever become a successful author or musician, then it will be because of the people in my life whom I get to watch be successful in their own roles in life.

To be perfectly honest, if I ever become famous for anything, then it’s either going to be because I’m a major fangirl or because I write about the people I watch and observe. Actually, it’ll probably be for both reasons. I can’t really have one without the other. I am the sidekick living in the shadows, because my role in life is to geek out about fandoms and to observe the people around me while loving and caring for them deeply because I’ve learned how to from the fandoms God has allowed me to be a part of. I’m a fangirl. I live in the shadows. I’m not special or talented. I am just me and me is just fine!